In 1997 and 1998 I began to hear messages coming to me as I meditated. In the spring of 1998, new spiritual guide started to share a wealth of information with me about coming changes in the Earth and the nature of reality. At that time, I was quite the spiritual brat and new to the concept of a spiritual path. When asked, the new guide said his name was Hilarion and that he was a representative of the Council of Seven. I had never heard of either Hilarion or the Council of Seven and I thought the name seemed ridiculous and too much like the word hilarious. So I asked if I could call him something else. I heard a gentle chuckle and Hilarion indicated we would stick to using the name he had had given me.

After the mediation ended, I searched the Internet for the name Hilarion and found that I had been gifted with information from an ascended master. This chastened me somewhat, but not too much. I really was very cocky and riding high on the euphoria of spiritual and psychic messages. I believe the euphoria was the hook to get me to take a closer look at the nature of my existence.

The messages from Hilarion continued regularly for about a year. I received quite a bit of information about my “past lives”, the past of our planet Earth, Earth’s role and importance to the galaxy and universe, as well as coming changes for the planet. I shared some of the information verbally with friends, but kept most of it to myself and used it to further my own personal understanding and spiritual and psychic growth. I didn’t write anything down.

As a result of my inner changes, my outer life shifted. I changed careers, divorced, met a wonderful man, Nate Hall, and helped him raise two young children. I continued to channel short inspirational messages from Hilarion, which I began to write down in note books, but I didn’t have detailed dialogue with him about the nature of reality.

In the summer of 2011, the two children were now adults. I began to have inklings that I was supposed to be writing down material to share with a wider audience, but I wasn’t sure how to proceed. I started typing my short channeled messages onto business card templates, with a view to creating an inspirational card deck. I also renewed active conversations with Hilarion again, but still didn’t know where they would be heading.

Then in a group meditation my Reiki teacher, Nancy Retzlaff, conveyed a message from the Council of Seven. My ears perked up and I knew I had been given a clue. Another nudge from the universe came when a psychic named Beverly Kay did a lovely 6-month reading and pushed me to begin writing books. Not book, but books plural. I was terrified and didn’t know how to begin or what to write about, but I knew I had to start somehow.

I began to pursue writing down my channeled bits more actively. I figured at least I was writing something, maybe it would turn into a book somehow. I asked Hilarion to provide me with more material from the Council of Seven. One day I found myself writing “You have been given these words. Use them to re-write your reality and so others shall as well.” Material about a concept called the sharing began to flow. The book “The Sharing: The Owner’s Manual for being Human” is the result. I hope the ideas bring more fun, clarity and freedom into people’s lives. That is their purpose. 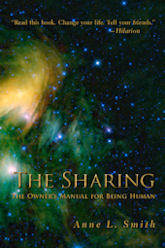